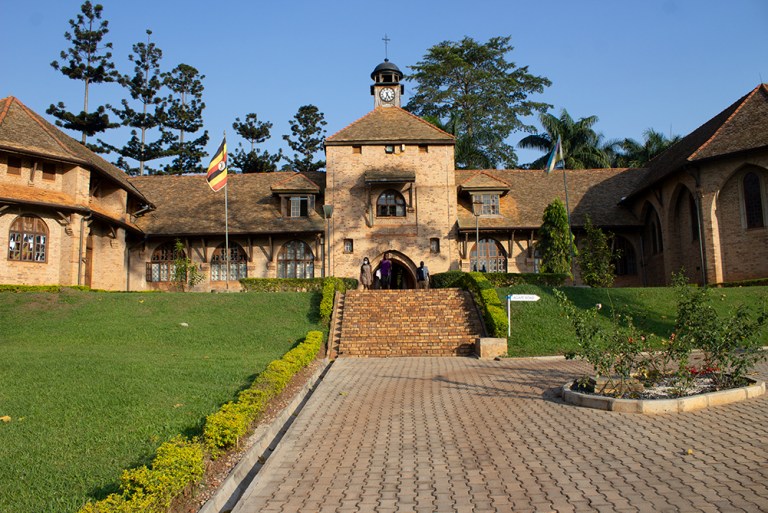 Uganda Christian University’s (UCU) Bishop Tucker building will soon join the club of centenarians. The Church based institution has an outstanding blend of architecture.

Bishop Tucker building is of medieval architecture that starkly differs from that of most buildings you would walk past on the campus. The neatly arranged baked clay brick walls tell of a time when such a building was associated with royalty and colonial administrators. A closer look over the center arch of the building’s entrance confirms this. The year “1922” is inscribed. This time next year, the Bishop Tucker building will make 100 years. Uganda was under colonial administration from 1894 to 1962.

With preparations for the event in its preliminary stages, a date is yet to be set for the celebrations.

“We plan to hold a hybrid event – both physically for those that can make it and an online event to cater for as many of our friends and supporters in the U.S and Europe,” Prof. Christopher Byaruhanga, the Dean of the Faculty of Theology, says.

It is then, according to Byaruhanga, that the faculty will publish two academic papers – one on the work of the Church Missionary Society and another detailing the over 30 years of service of Bishop Tucker after whom the theological college was named. The late Bishop Alfred Robert Tucker was an Anglican Bishop of Uganda from 1890 to 1911.  Prior to that, he was the Anglican Bishop of Eastern Equatorial Africa. The papers will become part of a book at some point.

The walkway to the building is paved with baked clay tiles, a sharp contrast to the tarmac walkways elsewhere on the campus, possibly to preserve the building’s medieval nature.

A plaque at the easterly side of the building’s entrance tells the origin of both the faculty and the facility that houses it. “To the Glory of God,” it reads. “And the memory of Alfred Robert Tucker, D.D, LL. D, Bishop of Uganda 1890-1911…” Mahogany-wood arches serve as a ceiling of the building. They are held up by Y-shaped wooden columns that seem to be grayed by time.

“From a bird’s eye view, the Bishop Tucker building forms the shape of an E,” Byaruhanga says. “On one end, you have the Thornycroft Chapel,” he says, with a guiding hand. “On the other, you have the Principals’ Hall.”

Between these are the equally storied offices and the Faculty of Theology. The Principals’ Hall is the university’s boardroom. In it are framed photos of the Bishop Tucker Theological College’s principals from inception in 1922 until when it became Uganda Christian University in 1997. The building also houses the office of the UCU Vice Chancellor.

The musty air of worn out wood welcomes visitors who walk through the Thornycroft Chapel door. Everything about the chapel signifies its age, except the new Yamaha speakers cleverly installed on either side of the altar. The aisle is hemmed by mahogany pews, made several shades darker because of age. All furniture here, from the pulpit to the pews, is sculpted, as opposed to being hewn.

At the front right-hand side of the chapel, two unique instruments sit silently – an upright piano and a large drum. The piano’s lid reads “Ralph Alison and Sons-London.” Its keys are detuned and ivories yellowed by several decades of striking. The hide on the drum has been smoothened to baldness by countless years of drumming it.

Together, these instruments tell of the intercontinental partnership that brought Thornycroft and the entire Bishop Tucker building into existence. “Resources for the building of Bishop Tucker College and the Thornycroft Chapel were sourced from well-wishers of the Church Missionary Society and those of the deceased bishop and slain King’s Army Rifle Militant,” Byaruhanga says, adding, “they were not the biggest funders, however. Royalty from four kingdoms gave building resources and labor to the cause.”

The kingdoms were Buganda, Tooro, Bunyoro and Busoga. Buganda’s king at the time, Daudi Chwa, was also credited for providing building resources for the Anglican Church’s Namirembe Cathedral. A glance at Namirembe Cathedral and the Bishop Tucker Building exposes their striking similarity in architecture and age. Their identical high ceiling arches and long columns are telling.

“The construction of the Bishop Tucker Theology College started in November 1919, only two years after the completion of Namirembe Cathedral,” Eng. David Kivumbi, UCU’s director of facilities and capital projects, says. “While buildings of the time were constructed using mud and cow dung or sun-dried brick and straw, baked brick and cement were used for these (Bishop Tucker and Namirembe). Deep excavations were made for their foundations, too.”

On the plans for the centenary celebrations, Byaruhanga said: “We plan to carry out renovations on the building, hold public lectures and, at the centennial celebrations, launch four academic (professorial) chairs for the four branches of theology – Church History, Systematic (doctrinal), Biblical, and Practical Theology.”

It is through this, he hopes, that the school that has trained the majority of Uganda’s Anglican bishops to date, will be better equipped to serve its purpose.