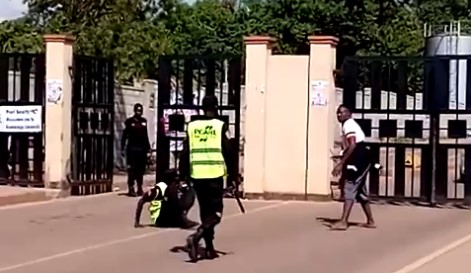 In a thrilling scuffle, one Kyambogo University student fought with Pearl security guard at the East End gate (Banda Gate) earlier this afternoon over mask issue.

The security guard requested the student to wear his mask before he could go through the gate, so as to prevent the spread of COVID 19 that is back. The complacent student refused and had the audacity to kick the guard when he insisted about the mask.

The guard, feeling offended, grabbed the student who quickly escaped from his tight grip and tried to enter campus through the wider gate reserved for vehicles. In an attempt to stop the student from being successful in entering the campus without a mask, the same security guard run after him and the student shot a kick at the guard’s belly that sent him staggering and falling on his rear on the hard tarmac road.

It was rather dramatic than shocking to see the security guard get on his feet again and kick the student back, although he didn’t succeed in stopping the guy from entering campus.

Lately, students without masks have picked a trend of fighting at security guards either verbally or physically. An incident similar to this happened last Wednesday 22nd June at the small gate when a student going to participate in a football match beat up and defeated two security guards after they had insisted that he should wear his mask which he didn’t have at that time.

The students very much agree that it is not right for them to pick up fights with people in charge of their security and safety. But if the security guards were politer and not very authoritative as they are when they command the students to put on the masks, perhaps these insults and fights would be minimized.