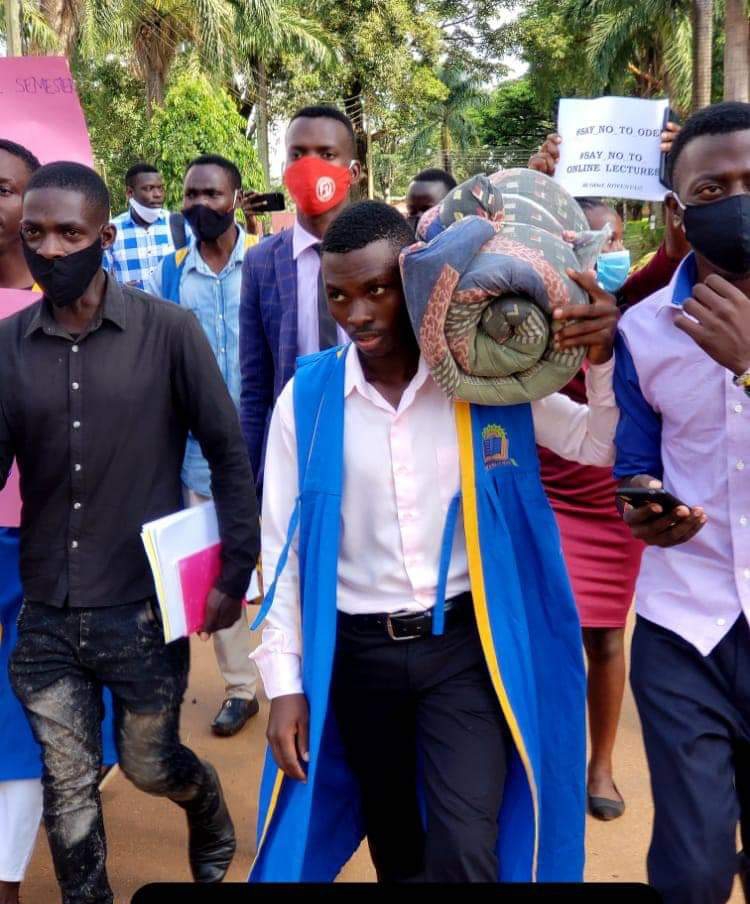 On Thursday morning, a protest broke out at Kyambogo University and according to the Kampala Metropolitan Police spokesperson, Luke Owoyesigyire, the students were protesting against the move to have lectures online after being mobilized by their leaders.

Kyambogo University Vice Chancellor Prof Elly Katunguka earlier this week suspended physical learning and ordered for online learning after a spike in covid19 infections as the university registered numerous cases. The charismatic Student leaders protested the move and called upon their subjects to express their grievances.

Our reporters linked up with one of the headliners of the industrial action, a one Nkurunziza Alphonse, GRC Faculty of Engineering and the 17th Guild Deputy Prime Minister of Kyambogo University. Nkurunziza is a new breed of activism (seen marching with his mattress in the protest) at Kyambogo University was arrested on Thursday this week as he led fellow students to demand for answers from the Vice Chancellor on matters concerning suspension of physical studies, waiving of surcharges, semester extension, and a release of a graduation road map.

“It’s a matter of having all these issues worked upon now lest we shall keep on fighting non-violently,” Nkurunziza noted

JUST IN! Makerere University Guild President, 5 Others Arrested Heading to Education Ministry for a Petition