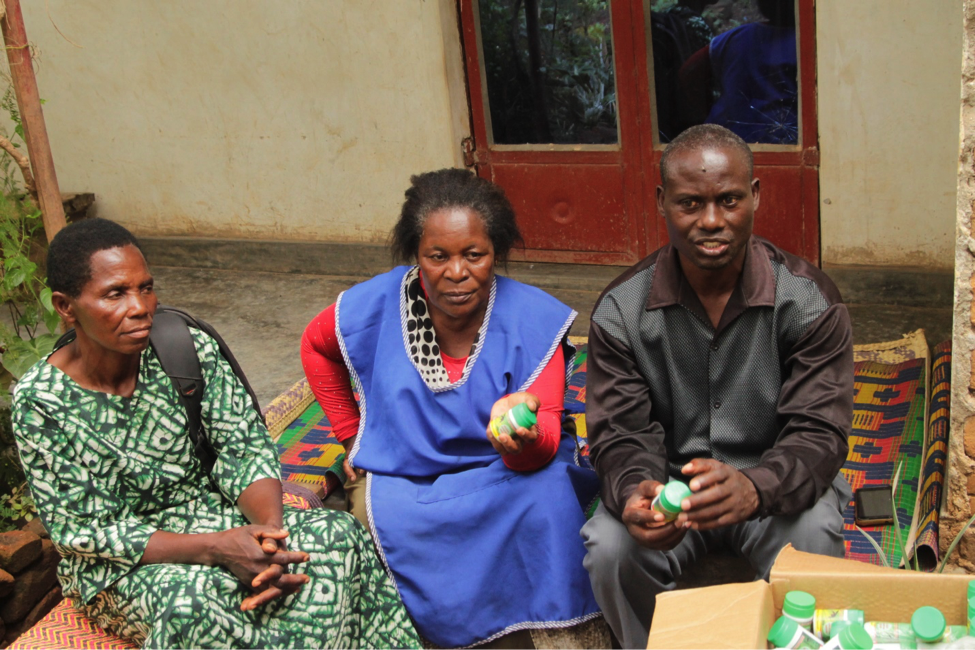 Mr.Sammex Mwanje Senabulya (black shirt) CEO COSTA Uganda and a contestant in the NSSF friends with benefits competition poses with women leaders from Luweero who have been taught how to make mosquito repellant jelly.

Those words were best understood by Mr. Sammex Senabulya Mwangye a resident of Luweero District, Mr. Senebulya who had worked for the Lutheran Foundation, World vision, and Concern for the girl child organizations retired in 2015 at the age of 50.

Mr. Senebulya who had worked most of his time in the Charity organizations developed an incredible passion for empowering the needy communities, however, according to him, most of these organizations prioritized common interests like Education, Human rights and health but not capacity building among the communities.

With such dissatisfaction with his former employers, Mr. Senabulya decided to retire from routine employment. After retirement he chose to withdraw his NSSF benefits that were worth UGX15M to be able to address the issues that were being ignored by the rest of Non-governmental organizations.

“While I had gone for a workshop, I learned how to make a home-made re-usable sanitary pad to address the issue of menstrual hygiene among young girls in the rural areas,” Mr. Senabulya said.

In Kasese district, a youth-led team inspired by COSTA-Uganda led by Mr. Sammex Senabulya formed an organization known as Queen Confidence that started making homemade re-usable sanitary pads. This project has created confidence in both boys and girls to eliminate the prevailing menstrual stigma among the community in Kyanya, Ibanda Kasese district.

Queen Confidence whose vision is to train the teenager holistically starting from the head then hands, and heart, has started training teenagers and women groups on how to make these homemade re-usable sanitary pads and menstrual hygiene management.

Besides training, teenagers have started selling these re-usable pads to schools, supermarket and charity organizations and on a weekly basis each teenager makes Shs.15000 hence improving their standard of living.

COSTA-Uganda has registered several success stories but it is still struggling in some areas especially in terms of funding of their different projects such as soap making and Mosquito repellant jelly.

Mr. Senebulya decided to participate in the NSSF friends with benefits competition because he believes in touching the lives of the needy people as per the mission of COSTA in different communities’ country-wide and he hopes to win the ultimate prize money. He plans to expand his services especially training communities in all regions of Uganda.

Mr. Senabulya concludes by reaching out to the NSSF to donate resources to these community-based organizations to create an impact on the lives of the needy communities.