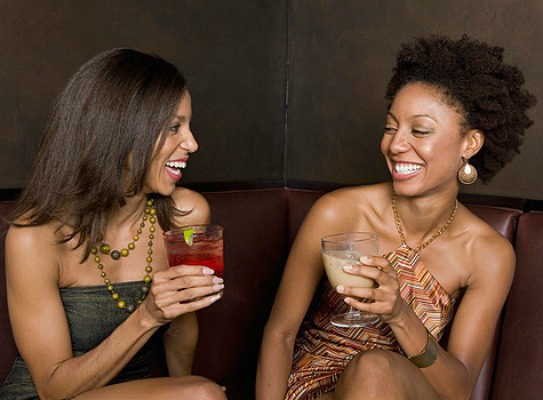 I wouldn’t say the female species loves to talk, it’s like saying humans love to eat. Speaking is part of a human’s cycle. However I will say this, girls need to talk. Nothing like a pow out with the girls to Drake’s music and the tea on everything. Guys have always been intimidated by a group of girls whispering in a far corner, more so if your girl is part of the clique and you so happened to do something wrong to her the previous day. You keep thinking they are coming up with inventive ways to call your manhood. This might be the true but here are the sterotypes we never tire of.

We don’t obsess over the Saul Agires of the world because we love soaps, no, it’s the passionate kisses and ripped bodies keeping us glued. Telemundo is source for conversation with my girls, we will go on about the way he held her, the way he kissed her, the way he looked at her… everything. It’s not just the Mexicans we are raging on about, Idris Elba, Michael Ealy, Roger Mugisha are part of the plan as well.

Oh girls love to medal, we love to stick our noses anywhere and everywhere. There’s always that girl we don’t like but we are kind of jealous of her because her man seems perfect. So we decide to knead pick all the reasons why the guy would do better. We are usually brutal here, bringing out the big guns like she’s a little whore, she has a bad odour, she’s with him for his money… anything to make the jealousy subside. Anything to make us feel better. Then if it’s a girl we like, we still pry. We say all the above but remember to compliment her every time we insult her.

Rage on about a fake slay queen.

Ho anti this word has somehow stuck; slay queen this, slay queen that. Now, we all know some babes are broke, fake and furthest things from queens. Boys always fall for Instagram pics as the retards they are but girls know how to sniff the bullshit out. We will go on about this pretender, each one pitching in on situations they encountered that wouldn’t certify that girl to be a slay queen. Girls love to hate and they hate pretenders that are getting attention from their pretence even more.

There’s always that guy we are all crazy about. Be it his eyes, his height, his great ass; there’s always something we can’t shut up about. So we will give each other updates. “I saw him yesterday when I went to buy food, even his food preferences are hot.” ” I saw him yesterday crossing the road, he looked like he was walking a runway show.” ” I saw him speak to some girl, ugly I might add, he can’t be interested in her.” We be obsessing. This later on passes to another guy, especially if we get to be this guy’s friend and he’s somehow lame. He has a girly voice, he’s overly into Taylor Swift, he picks his nose et cetera.

There’s always a girl who hangs out with the group, everyone is kee kee with her but they all HATE her. Talk time is time to go on and on about the reasons why we don’t like her. One would wonder why we hang out with her but she’s probably the one that’s a big spender so you tend to get free sodas, or the one with the hot guy friends, so you bare with her.

A “loser” that’s asking one of us out.

I put loser in quotes cause girls love to pretend to not to like the guy that’s putting in the time to know them. She will diss the guy around the girls but is hopelessly falling for him. We will lay out the guy’s personality, physical features… a full on analysis to determine if he deserves our friend.

And with those topics, you know what we are always speaking about. Ask any girl, this is all we go on and on about. Our tea be nasty.