One on One with IUIU’s Norman Tumuhimbise, the Jobless Brotherhood Founder 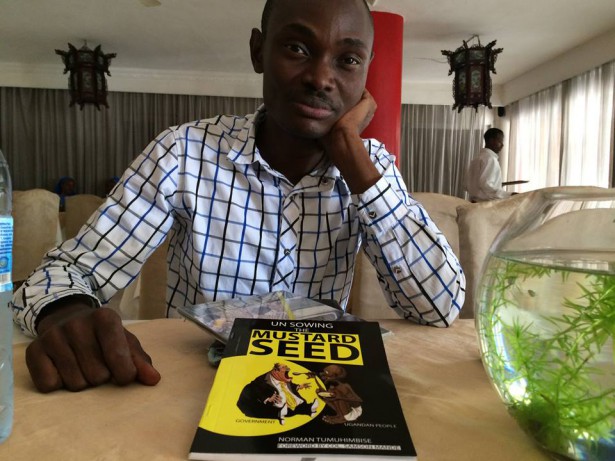 Born second out of 12 children, Norman Tumuhimbise the leader of the Jobless Brotherhood who prefers to demonstrate with pigs at the parliament clearly defines their intentions as justified, this was when I approached him for an exclusive interview. “The symbol of dumping pigs is to show discontent,” he said. In October 2014, for example, the pigs were taken to parliament after the activists were not pleased with the idea of spending one billion on the KCCA Kampala City festival despite the problems the country is facing such as un-employment, poor roads, floods and many others.

Norman Tumuhimbise is a national political critic who grew up in the barracks, his father being an army man, Norman was raised, studied in Masindi Army Boarding Primary School and since then, he learned not to fear army men. He is a third year law student at IUIU-kibuli campus who is currently having issues with the administration because of the critiquing nature of the government that he possesses.

What is the Jobless Brotherhood?

Our core values are to fight against corruption, youth manipulation, and exploitation. Parliament passed extra 46 constituencies recently, an MP gets at least 20 million per month, when you multiply that with 5 years, that would  mean 1.2 billion for one head, meaning these MP’S (pigs) consume 60 billion, Do you know what that amount can do as far as creating jobs is concerned?

How do you expect the government to ensure employment when most of the unemployed are uneducated and illiterate?

I am a law student and when working for a law firm, I was being given 300.000 shillings, you can imagine! “The education system should be changed to create jobs, not all of us can work for the government. One cannot study for all those years from nursery, primary, secondary, studies up to University and you are given a Bachelors in Business Administration, whose business are you going to administer? Jobs are little.” This business of licensing businesses is unfair: no policy protects a tenant people are being told to pay rent in dollars. It’s on record. Sudhir can wake up one morning and increase his rent, no one will question him, if you cannot raise the rent, you leave:  an ignorant person will readily come to occupy the vacant room.

What are your intentions with the current government?

The Jobless Brotherhood which we are yet to rebrand to the Jobless Platform brings together so many discontented faces with the government, we don’t strike but demonstrate through creative activism for example equating the president and his ministers to pigs. For a dictator like President Museveni, we do not expect results very soon and that is why in my first book, I equated President Museveni to the devil.

Why do you choose to symbolize the Ugandan government in such a manner?

Are you funded by external forces?

NO, it surprises me how people think we need funds to fight for our rights; we raise the money and cater for ourselves. I write my books, sell them and raise funds.

Rate the current government in one word

It is taken up by greed!

Who would you think can manage to unseat the current president in the 2016 general elections?

None: One [Mbabazi] whose wife is currently admitted has been part of the past regime and I do not think he can change what was there. The other [Besigye] said he will not come back provided Kiggundu is the Chairman Electoral Commission, he is now back. Surprisingly, If Muntu had gone through, I would be with him running around the whole country, it’s a personal opinion though.

What was your turning point?

It has been a series of events from greed to personal stories. Some may be personal like I have seen injustices made to my father, he is a returning officer with the UPDF, he was jailed and when we appealed he was found innocent but after he had served his sentence. I hate the way youth are being exploited, even now, considering the on-going elections. Young men are being made to carry sticks all in the name of campaigning and being Paid 10.000 shillings, and the President is happy.

What does your family think of your actions?

My family are my sympathizers. I think they like what I do because it is for a genuine cause. I do not like it when young people are being wasted and a nation is being buried: so they do understand that I am doing this for the betterment of this country.

Are you going to stand for a post in Parliament soon?

No, I do not want to contradict myself; I will just do national politics not until the government is changed.

Where do you see the future of the Brotherhood platform?

We want to capture all Universities in Uganda: by God’s grace, we see so many numbers young people (not less than 50 years) who will fight for their rights. I am sad when we are called the minority yet we are the majority: just like a guinea fowl that hides its face when it is scared. When we claim not to see the problem, the problem will continue seeing us.

What advice can you give to campus students?

I want to tell them to desist from youth exploitation which amounts to youth exportation. Men some of which are government officials look for desperate people who are trafficked to other countries and some end up being hanged but the government does little about it. Racism and segregation are real and therefore we need to stop relaxing and solve such problems. So many Arabs and white enjoy seeing Africans dong silly things: how I wish the children of ministers were the ones given such so called opportunities of being ferried abroad to work.

What was your kidnap about?

It is better to die for something than live for nothing. The government doesn’t want me to critic it which is normal like for any other government, it annoys them so much. The book “unsowing the mustard seed” revealed a lot of things that he has and hasn’t done for the country. The book had a lot of secrets like how Muhoozi’s mother, Brigadier Okoya, Luwum died. You can’t deny the truth however much he tries to concoct the stories.99.9%, I believe I was kidnapped by the government, I was picked on 11th August and was dumped on 26th August. Im still trying to heal psychologically. My back still has issues but I will get over it.

Norman’s first book “BEHIND THE DEVIL’S LINES” had a DVD with a lot of events for example; the Luweero triangle and its controversies among others. UN SOWING THE MUSTARD SEED was released and will be launched soon. The launch is to be attended strictly by young people. He aims at changing the mindsets of the young, whether one or two per day as long as he has made sense. Bala David Bwiruka, the current and 81st Guild president of Makerere University is one of the members of the Jobless brotherhood.