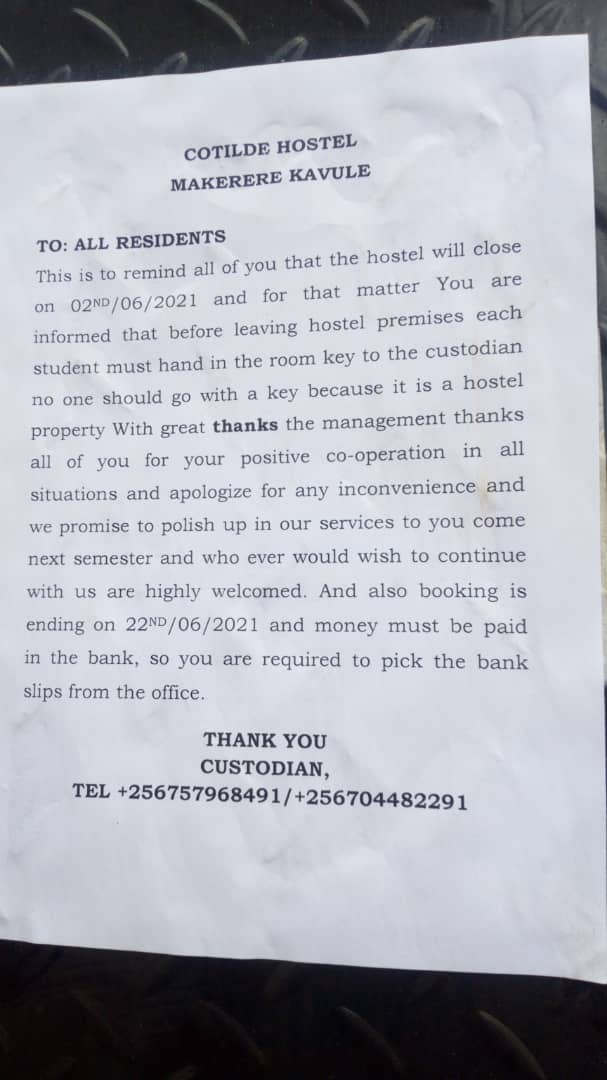 A trusted source (prefering anonymity) has revealed to our reporters that a certain hostel in Kikumi Kikumi Makerere is unfairly treating the residents, with some threatened to be kick-out regardless of the on going exams. The hostel is called Cotilde hostel, it’s opposite Fatuma girls hostel in kikumi kikumi (Makerere) owned by Magoola Emmanuel Matovu former parliamentary candidate for Busiro East constituency.

According to one of the victims, the director of the hostel is great but the management is quite horrible. He put management of his hostel under his son and another young relative “steven” who happens to be a custodian. Steven has mismanaged the hostel, to the extent, a student pays hostel fee, but he sales it to another person at a higher price.
The hostel can spend a full month without water, and the young custodian does nothing perhaps makes no communication to his boss, when approached he tells students “this is not your father’s building”

“The hostel is expensive, every year they increase the charges but still has no shuttle”
However students might have bared with all the short comings but not the arrogance of Steven and his Girlfriend Anita who abuse everyone at hostel treating people as refugees. When the semester opened up after Covid, Steven charged students full amount of semester fees claiming that the semester students had paid for expired during the lock down.

Today, the custodian has issued a document telling all students to vacate hostel by 2nd June 2021, yet most of the students will not have started there exams! And when you consider those that started physical classes on 1st March this is just three months as opposed to the four months of a semester

And when approached by the students to discuss the issue amicably, he told them that they can as well purchase land in Kampala to build a hostel