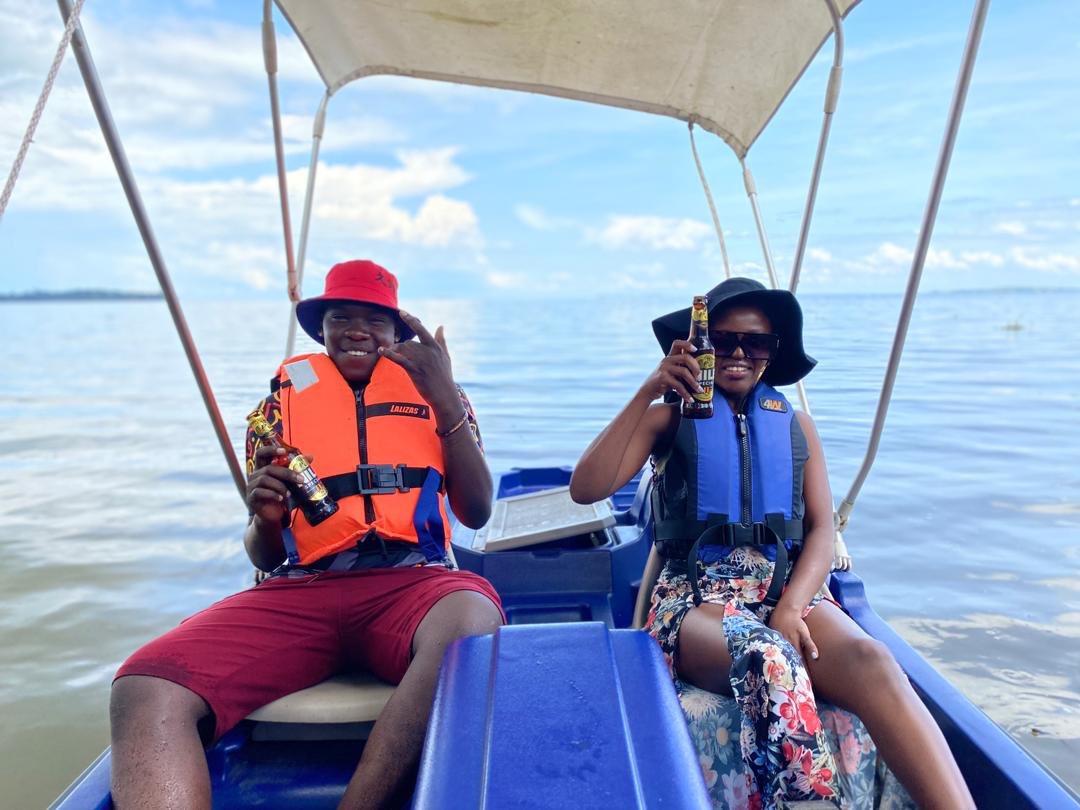 Nile Special’s tourism campaign that was dubbed MyUgandaMyNile came to a close over the weekend with the final winners getting treated to great views, relaxing breezes and many memorable moments while experiencing island life in Ssese over the weekend.

As the saying goes, the best is always saved for last and it was exactly the same with the final trip which saw winners engage in activities like pedaling on Lake Victoria, taking nature walks in the chilly forests on the island and jet skiing among others.

As a bonus in fact, the winners got to do other fun activities like waking up to watch the sunrise, breakfast on the lakeside and the charming accommodation at Brovad Sands Lodge to add on their wonderful experience.

Winners set off from Kampala in the mid-morning on Friday and drove via the newly constructed Entebbe Expressway to Entebbe where they had lunch at Café Javas.

The next part of the journey was a smooth sail on the Waters of Nalubaale aboard MV Natalie which is a subsidiary of MV Vanessa. The journey from Entebbe to the island takes approximately 1hr and 15 minutes and for our winners, this was enough time to capture captivating shots for the gram.

At Brovard Sands Lodge, a bonfire was lit to keep the guests warm as they sipped on a beer Made of Uganda. This moment was near indescribable.

The winners departed from the Island on Sunday afternoon but it was very visible that they had not had enough of the beauty despite having been there for three days.

The MyUgandaMyNile campaign started early November and it has seen a total of 8 lucky winners, each with 3 of their friends, enjoy an all-expenses paid for trips to different destinations in the country where they got a chance to dive in and appreciate the beauty that is the Pearl of Africa.

The first trip was to Murchison Falls National Park in Northern Uganda where winners were treated to a 5-star experience at Chobe Game Lodge and enjoyed a game drive in Uganda’s biggest National Park while getting an opportunity to see the scenic Murchison Falls after a boat ride on Victoria Nile.

The second trip which took place in mid-November was to Kapchorwa, Eastern Uganda. The winners got an opportunity to see the beautiful Sipi Falls, take nature walks and hike in the chilly forested hills of the Sipi area.  Thought the highlight of this trip was abseiling 100m down a cliff on Sipi Falls which was a test to see who were the strong hearted.

The third trip winners took the South Western route to the land of Rukira Basaija Oyo Kabamba Iguru Rukidi IV of Tooro.  Although the final destination was Kibaale, the winners got a chance to tour the Fort Portal city which was nicknamed the tourism capital of Uganda before heading to Kibaale Forest Camp which is deep inside the forest.

The third trip winners took the South Western route to the land of Rukira Basaija Oyo Kabamba Iguru Rukidi IV of Tooro.  Although the final destination was Kibaale, the winners got a chance to tour the Fort Portal city which was nicknamed the tourism capital of Uganda before heading to Kibaale Forest Camp which is deep inside the forest.

In Kibaale, the winners took a nature walk where they were able to view different craters in the area. The area of Kibaale has a total of 34 crater lakes but the most outstanding was Lake Nyinambuga which appears at the back of the UGX 20,000 note. The winners also trekked to the middle of Kibaale Forest on a hunt for Chimpanzees which are listed on the International Union for Conservation of Nature – IUCN’s red list as highly endangered with a population of around 300,000 globally.

Kibaale National Park has a total of 1,450 chimpanzees, divided into three communities; two for research and one for tracking.  The tracking community is made up of 120 chimpanzees in an area of 35 square kilometers and part of these is what the winners saw after braving the bushes. They were allowed an hour of being in company of the Chimps which share about 97% semblance in DNA with human beings.

“This has been a very successful campaign that has not only allowed us to reward our loyal consumers, but also provided a platform for Ugandans to share their moments in the great and beautiful sites of Uganda. Nile Special continues to be dedicated to showcasing the best of our country, not only to Ugandans, but to the world. “ said Robert Nsibirwa, the connections manager Nile Breweries Ltd.