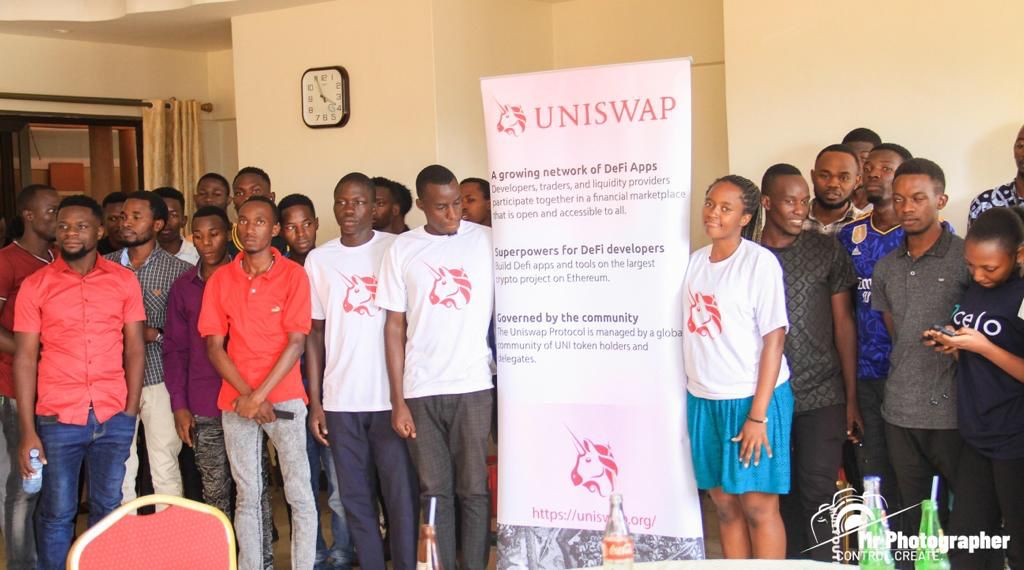 The Blockchain Club of Uganda (BCU) has concluded their Uniswap One University outreach campaign where over 500 students were engaged in physical and online discussions about web evolution, introduction to blockchain, insights on Ethereum, DeFi – a case for Uniswap among other topics.

Moses Mucunguzi, the CEO and Founder of BCU highlighted progress and growth in the Blockchain Club of Uganda community in a report that Campus Bee has seen. The report further highlighted the number of meet-ups/events hosted, regional coverage and number of students covered per outreach.

Mr. Mucunguzi further noted a delay in the accomplishment of their targets and goals due to unavoidable circumstances like examination periods at the higher institutions of learning

BCU hosted their first event at Uganda Christian University (UCU) in the Bishop Tucker Hall that attracted a total of 57 students; predominantly from a technical backgrounds like Computer Science and Software Engineering. The event was reported on Github Issue 1.

Their second Uniswap university event was at Kyambogo University, also in the central region of Uganda. The most discussion here, according to BCU, was on Ethereum and DeFi, a case for Uniswap as reported in Github Issue 2.

“This being a common audience with blockchain related interactions, we received a convincing number of 65 students and almost all were either Computer Science or Software Engineering students plus a few interested in Data Science.” Mucunguzi said.

The third university event was held at Islamic University in Uganda (IUIU) where despite the decline in the number of students with a tech background, students were very excited and curious to learn about blockchain.

BCU taught more of the introduction just like in the very first meetup and took the students through web evolution, introduction to blockchain, insights on Ethereum, DeFi- a case for Uniswap. This was reported in Github Issue 3.

BCU winded up their university outreach at the Mbarara University of Science and Technology (MUST) Conference Hall. We had an overwhelming turn up as we have prior contact from this university with GDSC and the university with close to 150 students in attendance as reported in Github Issue 5.

“From Milestone One, we have covered 90 percent of our introduction part, with only one meetup to go as we shift our discussion towards more technicality in Milestone Two. The reason is to prepare for our Hackathon later in Milestone Three.” Mucunguzi told Campus Bee.

BCU plan to extend their operations in the region especially to Rwanda, Kenya, Tanzania and the Democratic Republic of Congo (DRC) where students are expressing interests for similar activities in their countries.

The team also created a twitter account Uniswap Africa Community for a broader Uniswap community and to report future Uniswap activities in Uganda and Africa at large.

“We shall also move to creating meetup groups for different cities on the African region to start coordinating Uniswap events in the region.” Mucunguzi concluded.