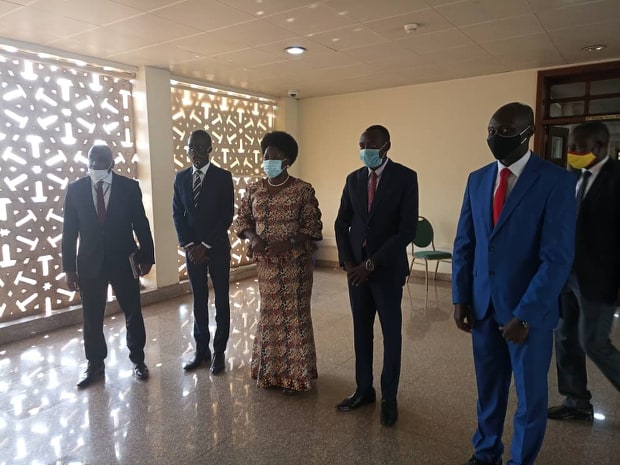 The Law Development Centre (LDC) management is in the spotlight after their own students came out to disclose an illicit campaign to gather signatures from students to support a petition calling for reinstatement of Online Lectures after they were suspended by the Ministry of Education.

Members of the Guild Council of LDC today morning petitioned the Speaker of Parliament asking for the House’s intervention in the said order above (from the Ministry of Education) to enable the institution resume online learning and lectures as a way of their bar course continuation.

The petition, that collected some 601 signatures was conducted online as a form of showing Parliament what the students, whom the House assummes are disadvantaged in the process, think about the whole program of online lectures.

“This is an online Petition by LDC Bar Course students. It’s aimed at showing whether the students are
in support of online teaching or not. It is addressed to the Parliament of Uganda, LDC Management
Committee, the Ministry of Education and Sports and any other stakeholder.” The petition’s introduction reads.

However, a section of the students, whose names appear in the petition say their school emails were hacked and consequently used to sign the petition in support of the learning. Speaking to Campus Bee, students that preferred anonymity disclosed that their Guild Leaders and the Administration are behind the whole plot to ensure the learning resumes, much to the disadvantage that comes with invading their personal space.

“The administration intimidated the guild and hacked into our accounts and used our LDC emails without our consent. This hacking is contrary to the recently passed data protection Act, 2019.” The Students told Campus Bee.

The said Act, in S. 35 creates an offence of “Unlawful obtaining or disclosing of personal data” in which, a penalty of imprisonment for ten years is established, upon conviction.

We have obtained screenshots from a whatsapp group of students at the Mbarara Campus who further allege and pin the authorities for using their personal data without their consent.

“We support online learning. We would very much want it to resume again but the methods they’re using to ensure it starts again makes us question their motives. My email address is personal. You cannot hack me to support an agenda without my express permission.” Another student discosed to Campus Bee.

We made efforts to reach out to the guild president for a comment, but his known number could not go through. The guild president, Alex Nuwahereza, and a group of other student leaders are the ones that presented the petition to Parliament.

The Speaker asked the Minister of Education and Sports to look into the petition and advise accordingly. According to her, since other institutions of learning are conducting online classes , LDCU should be allowed to do the same.

Hon. Elijah Okupa, who alerted Parliament about the classes, insists that whereas LDC is a unique institution, it’s important to note that it has both the Bar Course and the Diploma program. He says that while the Bar Course wants online classes, the Diploma program are greatly disadvantaged and their plight needs to be put into consideration also.

Hon. Hamson Obua, the State Minister of Education asked Parliament to give the Ministry two weeks to allow it address the issue of online classes across the country. He noted that whearas it’s good for LDC to conduct online classes, it’s important to look it as a general issue.

Attached, is the petition that students are protesting.