VIDEO! My Boyfriend Infected Me With HIV in My Third Year- MUBS Student Reveals 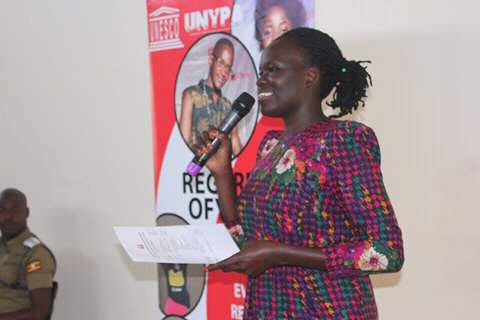 Aporo Sarah, a fresh graduate in bachelor of science in finance last week shared a video on her Facebook wall of herself taking ARVs , treatment for HIV that she got after having unprotected sex with now her ex-boyfriend .

“I must say, hiding about my status was more stressing than now since I can freely take my medication anywhere and anytime without fear of stigma” says Sarah in an online interview.

The 22-year-old has so far consumed up to eight doses of the same drugs. Her Facebook posts have touched hearts of many including her friends who only feel empathy for her because of what she is going through.

She tested positive of HIV on the 2nd of January of this year after having been infected with the virus by her now ex-boyfriend (name not provided).

She says was prompted to go for testing after a friend to her ex-boyfriend had hinted her about him (ex-boyfriend) cheating on her with a woman who was HIV positive.

She however admits that she loved her boyfriend that much that she even forgot to protect herself.

“I believe he is the one who infected me.”

After testing positive she was very devastated and broken and she wished she actually had gone for a test with him before engaging into any sexual activities. She had trusted him and loved him a lot in as much as he denied the accusations of having cheated with a HIV positive woman.

With the great support from her mother, her counsellor and her boss she actually managed to sail through fiercely.

She made a decision to live a positive life with a positive mind-set since by nature she has been a person who hardly gets beaten down by a challenge so this made her to get up and go to great heights of confidence.

“I live like someone HIV negative which is awesome- however, I never forget to take my ARVs daily at 10 pm”.

On the 1st of May 2017, Aporo actually informed people through her Facebook posts how she had actually forgiven her ex-boyfriend. Aporo loved him so much to forgive him in spite the fact that he had never asked for forgiveness despite her pointing it to him.

“Positive living is a personal decision, many will tell you what they think but all in all the decision is yours and to all those dating, a man or woman who will accept going for a HIV test that person is my hero she says to the society”.

She has found nothing wrong with living with HIV but a quicker podium to live a happier and healthier life. Her greatest inspiration is that it’s her responsibility to make sure that no one else infected by her.

Being the personal secretary of the deputy principal of Makerere Bussiness School, she has used this post to be an activist against stigma amongst the youth at the univeristt.

She has also involved herself in charity deeds, to help children infected with the virus and also living in abject poverty so as to also get at least a meal a day for children like 16 year old Kakwete.

She also advises those living with HIV not to miss their ARVs and also take all necessary health precautions because there is nothing negative about being positive.