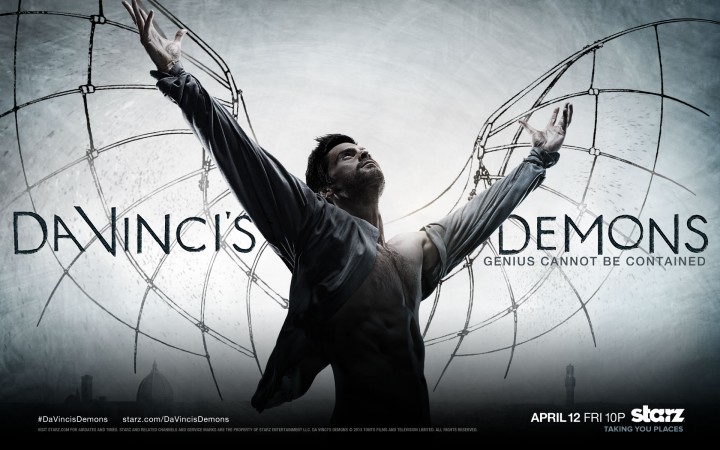 Conversely, Starz confirms Season 3 will be the last for Da Vinci’s Demons.

Fans of Starz’s Da Vinci’s Demons, we have good news and bad. On the plus side, the premium cable network has released a first trailer, poster and October premiere for Season 3 of the historical drama! Conversely, Starz confirms Season 3 will be the last for Da Vinci’s Demons. Also, your frogurt is cursed.

Facing the threat of Ottoman invaders armed with his own tech, the third and final season of Starz’s Da Vinci’s Demons will premiere on October 24, and see Tom Riley’s Leonardo “align with old foes, repair broken friendships, discover hidden secrets, and resume a dangerous quest, all while knowing that he is his own worst enemy.” Entertainment Weekly broke word of the cancellation, also revealing the first trailer and key art.

While ending Leonardo’s journey is bittersweet for me, I’m happy we’re ending the story on a high note. Leonardo was famous for his mirror-writing, and there’s a symmetry to the entire series—between the first episode and the final one—that I think the maestro would have appreciated. I want to thank our dedicated fans around the world for viewing and engaging with such passion. I want to thank Starz for joining me on this crazy romp. And I want to thank Tom Riley for turning in a consistently brilliant performance. It’s no small feat to portray a genius, but Tom did it with grace and humor. I hope everyone enjoys these final episodes as much as we enjoyed making them.

Certainly sad news for fans of the series, but you can at least take comfort in the October 24 premiere by the trailer and key art above. Was Da Vinci’s Demons brought to an end before its time?
By Kevin Fitzpatrick